The Fault in Our Stars and Free Money in Brazil 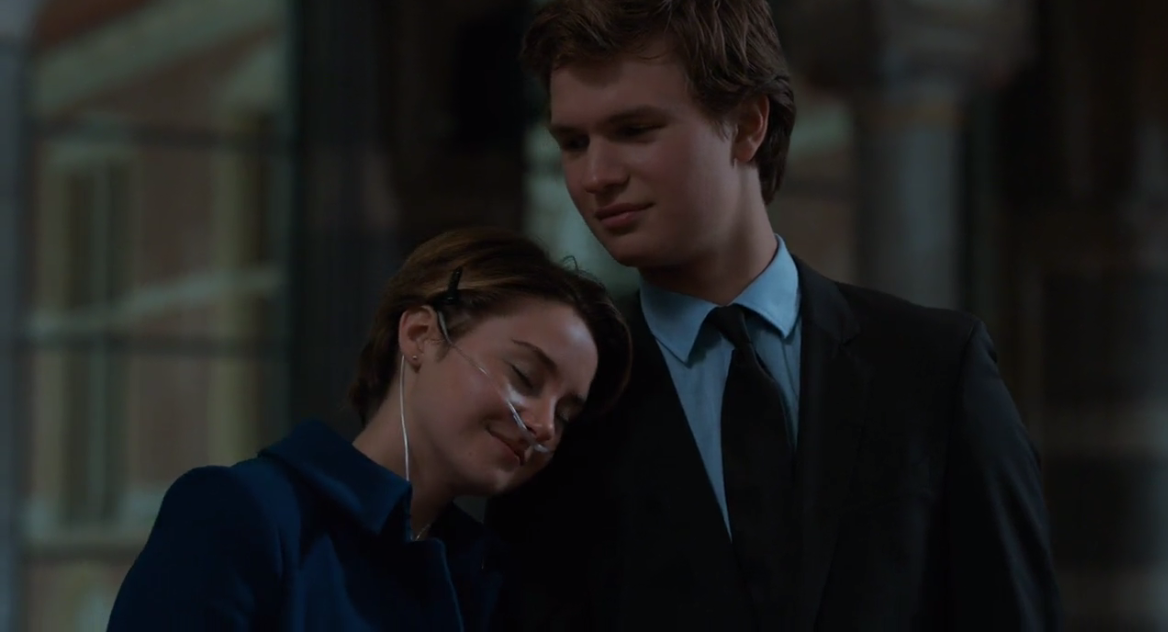 How the stars aligned for "The Fault in Our Stars" in Brazil.


With John Green’s The Fault in Our Stars (referred to as “FIOS” for the remainder of this article) sold roughly a bazillion copies and the Young-Adult film genre continuing its Golden Age, a film adaptation starring perfect YA template actress Shailene Woodley (of Divergent and the excellent The Spectacular Now) on a micro-budget of $12 million was all but certain to be a commercial success. Box Office Mojo forecast a breezy $120 million take domestically and another $55 million in the foreign market. While a bunch of their other summer forecasts seem hilariously optimistic in hindsight (the abysmal Deliver Us From Evil was a brutal $100 million too optimistic), the FIOS projection didn’t seem too far off.

Well, they were. The estimate was an equal $100 million off the mark… in the other direction. And now FIOS might be the stealth success of a summer that had two Marvel movies and a “Michael Bay makes robots blow stuff up” shaky-cam fest.  FIOS grossed $124,461,268 domestically, close to BOM’s estimate. The foreign gross, however, was an absolutely insane $155,787,000. 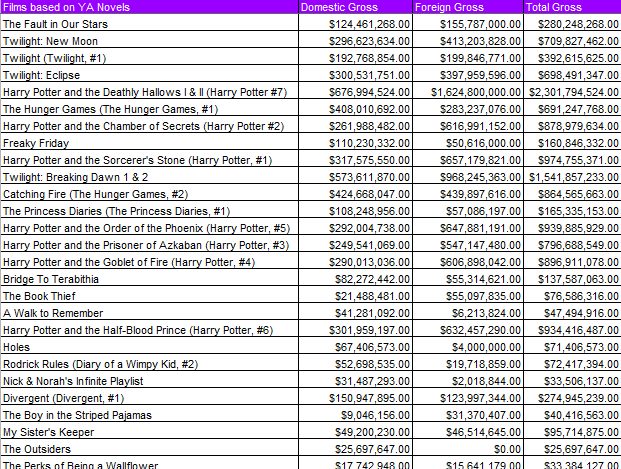 Those are some insane numbers FIOS put up. It's not quite up to the big YA franchises, like Twilight or The Hunger Games, but in terms of making dollars, there are worse things to be compared to. Where FIOS really blows everyone away by leaps and bounds is profit relative to budget, or how much return did the studio get back for each dollar they invested.

In case you can't read it, FIOS made $22.35 per dollar on its budget, which is the best per dollar return out of every YA movie ever. EVER! Even if you add the mysterious marketing budget, FIOS is still making $14 per budget dollar. If that's not an unmitigated success, I don't know what is.

Anyone can tell you that the foreign box office has become significantly more relevant in recent years. China has tripled its share of the worldwide box office in the past five years, with Transformers: Age of Extinction collecting over $240 million there alone, more than its entire domestic take. Pacific Rim got a sequel green lit despite being an expensive flop in the States, making $100 million against its $190 million budget, because it’s foreign gross was $309 million, with more than a third of that coming from China. However, most YA movies are not released in China. Why? I don’t know, and Google doesn’t seem to want to tell me. Maybe the teenage troubles of girls in love with vampires or zombies don’t appeal to the average Chinese high-schooler. Maybe the studios figure that it’s hard to sell a film in that market without a recognizable superstar like Jennifer Lawrence or Tom Cruise in it, which most inexpensiveYA novels lack. Despite this market mostly avoided, YA movies have generally done alright in the foreign markets, which for this genre of film has a few consistent big players: France, Germany, UK, and surprisingly Brazil. A look at the splits between domestic and foreign markets are pretty even (discounting those Harry Potter films, which took all of the United Kingdom’s money), as you can see above.

Brazil accounted for 3.6% of the foreign box office receipts in 2013.1 Usually, for movies like Godzilla or Dawn of the Planet of the Apes, Brazil lags behind, albeit slightly. For YA movies, however, Brazil comes out to theaters, matching the usual second fiddle UK. This is probably because Brazil has far more of its population in the right demographic for the genre with roughly 30% more of its larger population in the 15-24 age range and with a significant advantage in female:male ratio in that age group.2 Brazil is a country with a young population, and that makes it an ideal audience for the YA genre. Because of all this, Brazil can keep pace with the other three European audiences most of the time, at least with these YA movies that originate in the States. One would assume that Fox would be more than happy if Brazil kept pace with the rest of the other four players, right?

Well, after seeing the results, I’m sure Fox execs went from six-to-midnight: 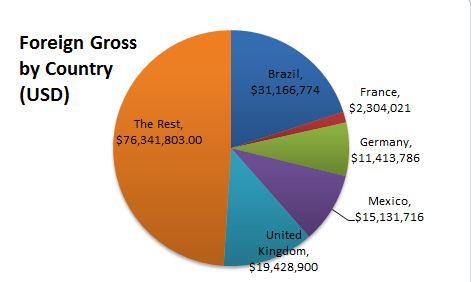 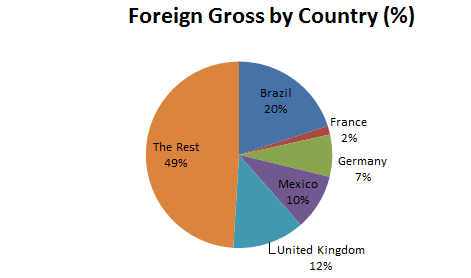 FIOS reaped $31,166,774 from Brazil alone, easily out earning the European powers. France has time to bump its numbers up, as FIOS has only recently been released there. However, it’s difficult to imagine it earning anywhere near enough to make a difference. 20% of FIOS’s international box office is coming from Brazil. That’s enough to cover its $12 million budget and the shadowy marketing budget almost twice over. That’s not just playing with house money at that point. It’s playing with house money against a dealer who failed fourth grade math. There is clearly an outlier here. What was going on in Brazil at this time?

The World Cup was going on, is what. An estimated 3.7 million tourists came to take in the World Cup, which started on June 12.3 FIOS had a June 5 release date in Brazil. Assuming that people can’t be engrossed with soccer and samba for the three weeks before the knockout rounds, I imagine some of those extra 3.7 million went to see a movie. So, what was out in Brazilian theaters those weeks?

Two movies with big international stars were in only their second week. Maleficent starred Angelina Jolie, who is a big international draw and squeezed $10 million from Brazil back in 2010 for the thoroughly mediocre The Tourist. The other was Edge of Tomorrow starring Tom Cruise, who strangely has never been a draw in Brazil with recent duds Oblivion and Jack Reacher bringing in meager sums relative to the other previously mentioned countries. Edge of Tomorrow, in fact, was out earned in the domestic market by FIOS, and it only barely beat out FIOS in total gross thanks to Cruise’s success in Asia, which delivered Mr. Jerry McGuire $115 million from China, Japan (where the source material All You Need is Kill), and South Korea.4 X-Men: Days Future Past had been out for three weeks already, and at that point for any movie, whoever was going to watch it had likely already seen it. So the real competition in those first weeks for those millions of tourists and the millions of native was just Malificent, which was, again, a week older.

While the opening gross for FIOS wasn’t particularly special, bringing in a more than respectable $5.3 million, the fact that the FIOS’s sales didn’t degrade over the course of the month was. For example, X-Men: Days of Future Past dropped 45% in its second week, a week before FIOS was released, while Godzilla got hit with a 78% drop in its third the same week. FIOS’s numbers weren’t nearly as severe, dropping 24% in its second week while actually improving by 0.5% in its third while the World Cup as in full swing.

For comparison’s sake, the other Shailene Woodley (and sort of Ansel Elgort) YA vehicle, Divergent, took a mere $6,482,718 in Brazil, falling off considerably quicker. By time the knockout stages began on June 25, FIOS had already banked $21,764,923, and then the numbers started dropping off. During the same period in the domestic market, FIOS didn’t fare as well in terms of market share, due to How to Train Your Pet Dragon 2 being released a full week earlier stateside and 22 Jump Street entering the fray after being excluded entirely in Brazil. Faced with new competition, FIOS suffered a substantial 63.4% drop in the domestic market.

So, what was the value of this World Cup bump? The best way to find a number is to find a comparable group of films.  First let’s take YA movies that aren’t depictions of extraordinary circumstances, like supernatural or post-apocalyptic based stories. Hilariously, the list is rather short. Of the 55 samples I took, there are six such movies, and they aren’t even in the same league as FIOS commercially.

Of these, only The Perks of Being a Wallflower comes close to having an even foreign:domestic split, and of these only Perks has been released in all of Brazil, UK, France, and Germany. This is a ridiculously small sample size, so don’t take this as gospel, but humor me for now. If we average out the three EU countries and then divide that by Brazil’s gross, we get this.

So the Brazil take is roughly 29% of the average of the three. The average of the three for FIOS (remember take into account that France only just had FIOS released) is $11,048,902.  29% of that is $3,165,010.21, which is the projected total. Subtract that from the actual $31,166,774, and we could estimate that FIOS made an extra $28,001,763.79 from simply being released at the right time in the right place. Again, it’s a miniscule sample of one other movie, and I would bet that the extra profit is somewhere closer to $20 million or so. But still, couldn’t movies like The Giver or If I Stay, equally cheap YA adaptations have cashed in on this rare occurrence had they moved their release a month or two up? Did Dreamworks not want to compete with the World Cup and push How to Train Your Pet Dragon 2 back, and did it end up costing them a sizable chunk of profit? I would say so.

Of course, the World Cup only happens every four years and you would need a perfect storm of factors like the ones that FIOS took advantage of; demographics, favorable opposition, and a massive influx of people of which a sizable chunk would not have been the target audience otherwise, for a month-long event in a place that has a decent amount of movie theaters. Such a situation does not await anyone for the next two World Cups, unless Russia and Qatar really start investing in their movie industry, but there are still Olympics every two years and the Euro Cup. With a little bit of good planning, maybe studios can turn $10 million into $20 million like The Fault in Our Stars did this year.