Sin City: A Dame to Kill For and Josh Brolin as a leading man 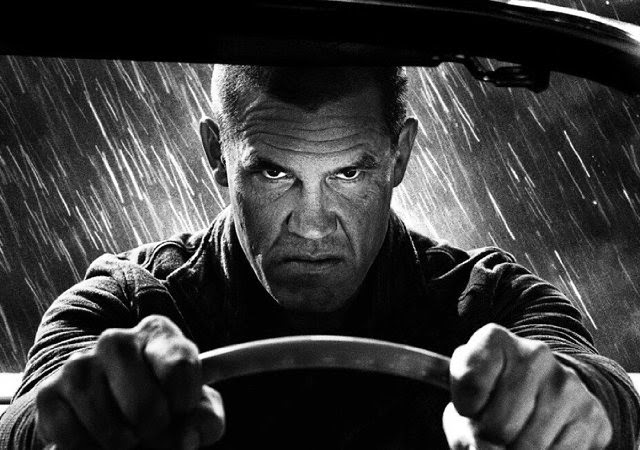 What has Josh Brolin done since No Country for Old Men?

I recently served as a pallbearer and received a small stipend, of which it is apparently tradition to spend it immediately and all at once. Seeing as the post-funeral meal was at Chinese buffet franchise Mandarin, my mind immediately thought of Ben Kingsley’s quietly great portrayal of Mandarin in Iron Man 3 and its excellent movie poster (but what do I know. I hung this on my walls). For Torontonians, the only place with a decent selection of posters is the aptly named MoviePoster.com, a site which has a poster and an alternate poster for basically every movie in existence. As such, I ended up spending two hours just going through all the pages and remembering all these movies that ought to have been forgotten.

One such movie was Jonah Hex, a film that is now best known for baseball writer Jonah Keri’s predilection for writing about a baseball player or team immediately before said team or player forgets how to play baseball. I’ve never seen it, nor have you, nor has anyone. It was a massive, horrendous flop. I was with a few of my friends while I was browsing, and felt the need to exclaim “Jesus! When was the last time a Josh Brolin movie made money?!” My friends shrugged simultaneously and went back to cooking what smelled like the gruel from Oliver Twist.

It was an interesting question though (at least to me, the guy who wrote about how much money The Fault in Our Stars made in Brazil).  Josh Brolin is an older gentleman, aged 56, who was a child actor in The Goonies before falling off the face of the planet for a decade, then getting small roles mostly as a villain in a bunch of crummy movies. Then, in 2008, he landed a role in The Coen Brothers’ No Country for Old Men and became a star.

It’s been six years since that breakout role, and in that span Brolin has found himself suddenly thrust into leading roles after a career of different iterations of trying to thwart Paul Walker. However, that’s basically where the positives ends. Here’s how Josh Brolin-led movies have done since then:

That’s as bad a six years as it can get, quite frankly. Other than Jonah Hex, which was a role Brolin was cast in prior to his super success in No Country for Old Men, all of these other movies should have had a reasonable chance to be successful commercially. Old Boy was an adaptation of a very well-regarded Korean film. Gangster Squad had a slick trailer and had enough talent on screen that it should have worked. Labor Day is in a genre that is basically the layup of films. Sin City: A Dame to Kill For was the sequel to a hugely successful film. Despite all this, only Men in Black 3 was a clear win for Brolin-led ventures.

None of these films were well-regarded critically either.

Of course, this can’t be laid at Brolin’s door. Brolin is in fact fine in all of these films. It’s largely the material in each of them that led to them all being critically shrugged at, be it from terrible writing (Gangster Squad was written by Will Beall, who was the lead writer for the incredibly bland ABC television show Castle) or uninspiring direction (Spike Lee was a terrible decision for Old Boy). At age 50, Brolin probably saw his window closing and rightly decided to cash in on the acting capital he earned in No Country for Old Men. But still, that is a truly woeful selection of movies in such a short span.

But wait! Bad movies make money all the time! Why don't Josh Brolin’s? Well, for one he isn’t a household name in any sense, which hurts domestic box office receipts and kills internationally. The only movie on this list that made a significant amount of cash outside of North America was Men in Black 3 and almost assuredly because of Will Smith’s name on the door (and the future tech stuff that Asia goes apeshit for). No Country for Old Men may have been good, but it’s outside the demographic that you’d typically rely on for a Robert Rodriguez joint.

It’s not like Brolin is alone in this situation. Ryan Reynolds is a comparable example, having bombed just as often and significantly worse than Brolin. Colin Farrell practically specializes in movies that are doomed to fail. But it’s still a little disappointing considering that he appeared headed for a career resurrection after No Country for Old Men, and now he might be at the tail end of his leading-man days with nary a memorable film to show for it. He is tabbed as the big space villain Thanos in the Marvel universe films, although he probably won't do anything more than sit on a hover throne and bellow plot advancements at CGI people like he did in Guardians of the Galaxy until The Avengers 3. He does have a pair of movies coming up where he's in a main role: Inherent Vice and Sicario. You have to imagine that if Brolin is going to land any more, one of these needs to be a hit.

All box office figures taken from Box Office Mojo except those marked in yellow.
"Studio Gross" an estimate, taken as 60% of "Total Gross" as theatres collect roughly 40% of box office, multiplied by 2 for home video, merchandising sales
"Budget w/Marketing" an estimate, taken as double the production budget (50% spent on domestic marketing, 50% foreign)