The Raid: Redemption and American Remakes that make no sense 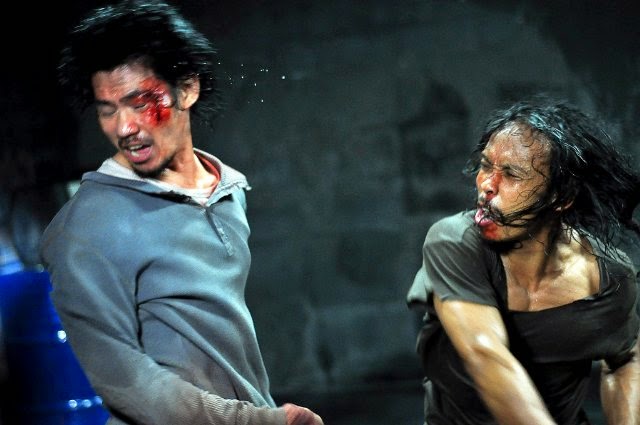 What are the odds that the American remake of The Raid will be successful?

At some point in 2011, The Raid released this upon the internet.


That trailer is a 1:38 of insane violence, action which captures an intensity that most action movies in the United States can’t match. About seven seconds of that trailer establishes what The Raid’s story is about; thirty cops go into a building and try to take down a crime boss. That story to action ratio is more or less maintained for the actual movie. And that movie is awesome. Freed of even the notion of story or logic being important (why does everyone know martial arts? Why does everyone seem to own a machete?), The Raid instead used them as simply a means of propelling its heroes into one terrifically violent fight to another as quickly as possible. The fight choreography and cinematography is tremendous. Everything is shot so that the audience has the best possible angle, with nary an idiotic shaky-cam to be found. It is an excellent piece of action cinema, with its only barrier to success worldwide being that the few times people have to talk to advance the thin plot, they’re speaking Indonesian.

A couple months after its release (well, its TIFF release), The Raid got greenlit for an American remake. The cast is starting to take shape, with Taylor Kitsch cast in the lead role and Frank Grillo (Crossbones/Rumlow in Captain America: The Winter Soldier) in one of the supporting roles (of which there are apparently another 10 “integral” ones), and a script apparently written by the screenwriters of the largely unnecessary Battleship. It appears that the remake will be upon us soon.

The big question is why? Why is this remake necessary? Let’s consider this from the two perspectives that matter: artistic and commercial.

Artistically, there is almost no reason for an American version of The Raid to exist. The Indonesian version is a martial arts masterpiece. It is the epitome of the stunt industry. Iko Uwais, starring as the rookie cop archetype Rama, cuts down entire hallways of thugs in shot after shot of folks getting gutted like fish. Can someone Kitsch, who is mostly versed in gunplay movies, capable of such feats? Probably not. Can anyone shoot a fight scene like Gareth Evans did in both his The Raids? I sincerely doubt it, or I haven’t been watching the right movies where they have. At one point in the second movie, Iko drives through a wall and clobbers some hapless thug with his car in what had to be a physical stunt and not CGI-assisted. Is that even legal to shoot in the States? I assume that an American version will involve more gunfights than fisticuffs, since this is America after all, dammit, but if that actually is the case, what’s even the point of paying homage to a movie where the main draw are scenes like these where dudes are just getting demolished by knives and turbo-fists?


Another point of fact is that this movie has already been remade in spirit by the underappreciated gem Dredd. Here are the plot summaries that I found on IMDB:

The future America is an irradiated waste land. On its East Coast, running from Boston to Washington DC, lies Mega City One - a vast, violent metropolis where criminals rule the chaotic streets. The only force of order lies with the urban cops called "Judges" who possess the combined powers of judge, jury and instant executioner. Known and feared throughout the city, Dredd is the ultimate Judge, challenged with ridding the city of its latest scourge - a dangerous drug epidemic that has users of "Slo-Mo" experiencing reality at a fraction of its normal speed. During a routine day on the job, Dredd is assigned to train and evaluate Cassandra Anderson, a rookie with powerful psychic abilities thanks to a genetic mutation. A heinous crime calls them to a neighborhood where fellow Judges rarely dare to venture - a 200 storey vertical slum controlled by prostitute turned drug lord Ma-Ma and her ruthless clan. When they capture one of the clan's inner circle, Ma-Ma overtakes the compound's control center and wages a dirty, vicious war against the Judges that proves she will stop at nothing to protect her empire. With the body count climbing and no way out, Dredd and Anderson must confront the odds and engage in the relentless battle for their survival.

In Jakarta, Indonesia, Lieutenant Wahyu organizes the invasion of an apartment building that is the safe house of the powerful and cruel drug lord Tama and his gang. The SWAT team breaks in the building but one lookout sees and warns the gangsters and the police force is trapped on the seventh floor. They learn that Lt. Wahyu has not informed his superiors about the operation. Now the police officers have to fight with limited ammunition against the armed and dangerous gangsters.

They’re basically the same damn thing, only Dredd is to gunfights what The Raid is to martial arts. Dredd was everything you would want to emulate in a The Raid remake; it was relatively cheap to make at $50 million and it was pretty well-received critically. But even with all that, the film failed to make money, as most people stayed away thanks to the stigma of Sylvester Stallone’s turn as Judge Dredd.

That’s not to say that there’s no reason for an adaptation of any Asian movie, it’s just that it only really makes sense when the movie is story-driven. Understandably, most people’s main gripe with these overseas films is the language barrier. A movie like Infernal Affairs made sense to be adapted into Martin Scorsese’s The Departed because its main draw was its story, one that would transfer well from its Hong Kong setting to Boston.

Of course, none of this matters if the movie makes money. By the looks of it, it’s harder to not make money these days in the action genre.

This is a chart of action films that came out so far in 2014. Even accounting for marketing estimates, only Bad Paul Anderson’s Pompeii came out with a loss, although the freefalling Sin City: A Dame to Kill For and The Expendables 3 look like they are both in a barrel of trouble.

Taylor Kitsch movies, however have done terribly. He’s been the leading man in two and part of a leading triumvirate in Oliver Stone’s Savages. Here’s how they have done commercially:

Both Battleship and John Carter were horrific disasters, making the meh-ness of Savages’ take seem like a huge win. Since 2012, Kitsch hasn’t been trusted with a big budget lead, playing a supporting role in Peter Berg’s Lone Survivor and then going back to Canada to make the super small The Grand Seduction, who’s main draw might have actually been Brendan Gleeson (that guy in those movies you never watch) anyways.

However, it doesn’t appear likely that he’ll be handed a big budget with The Raid remake. Screen Gems is the developing studio and they usually keep their budget is a much more modest, eight-digit range. 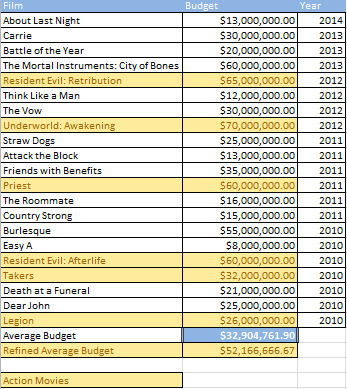 This graph, depicting Screen Gems’ filmography from since 2010, shows an average production budget of $32,904,761.90. For action movies, they average out to $52,166,666.67. While I’m generally okay with Frank Grillo, who is actually some sort of martial artist apparently and is good in every role I’ve seen him in, I don’t imagine he’s an actor that calls for a large salary. So far it doesn’t sound like The Raid remake is going to stretch that budget very much. I would say that the safe bet is they’ll set it at around $60,000,000, in line with other Screen Gems’ action fare like Underworld: Awakening and the Resident Evil series, and the close to the previously mentioned Dredd. At that budget, the remake would just need to have modest returns to make a return on investment, unlike Kitsch's other two big movies that needed the GDP of small nations.

Another thing to consider is whether The Raid remake can sell overseas. Action movies this year have been heavily reliant on the foreign box office, specifically in China, in terms of total gross, as you can see in the following graph: 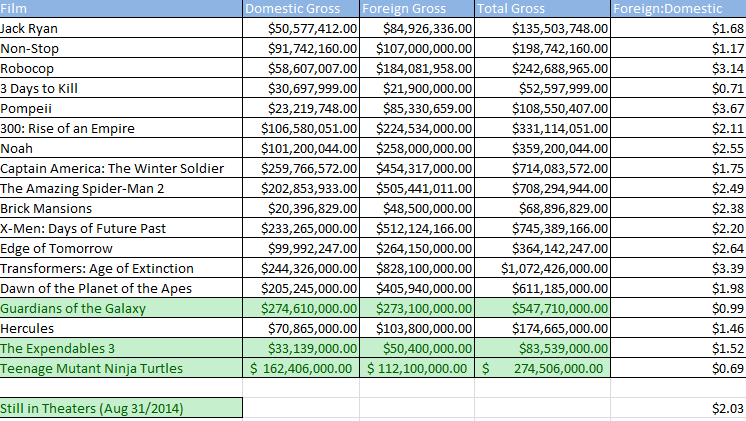 Meanwhile, Asian film adaptations have had an almost even foreign:domestic gross ratio (1.05 F:D ratio compared to a 2.03 F:D in other action films). This is a bit misleading because the former is a list comprised of movies in the span of a decade while the action graph is of movies coming out this year. However, the two Asian adaptations that have come out recently, Godzilla and Oldboy, still would be in the lower half of the big graph.

Let’s do an exercise. Let’s change the foreign grosses for the top five F:D ratio ranked movies from the second graph to scale with the ratio from the first one. It would look like this.

Uh oh. Those are some poopy numbers. Edge of Tomorrow goes from passable to a major bomb. Noah makes no one any money. Robocop basically becomes as unsuccessful as everyone imagined it would be. Pompeii goes nuclear and maybe finally stops Paul Bad Anderson. Only Transformers makes back some money. Of course, this world would assume a lot of things, like Tom Cruise and Russell Crowe’s star power counting for nothing, or the fact that China loves the shit out of robots and robotic-like things (it doesn’t explain why anyone thought giving a nine-figure budget to something as clearly dumb as Pompeii was a good idea). It also assumes a marketing budget that is spent normally, which is 50% of the production budget domestically and another 50% of the production budget on foreign markets, something that they might not bother doing if they figure it won’t sell in markets that didn’t mind watching Asian men speak in Asian languages. Also, Kitsch’s two starring roles made most of its money in foreign markets. Yes, they were both colossal bombs, but that is largely because they put a relative unknown (up to that point, Kitsch had been Gambit for some reason in X-men: Origins and Riggins on the criminally unwatched Friday Night Lights television show) in front of nine-figure budgets and movies that were doomed to fail.

With a more modest budget and the absence of the weight of an entire studio’s summer on its shoulders, maybe a Kitsch-led remake could work financially. However, the odds seem heavily against it. The best-case scenario seems to be Kitsch starting his own McConnaissance in his starring role in True Detective and making another Dredd. That, financially speaking, that is a woefully depressing thought.