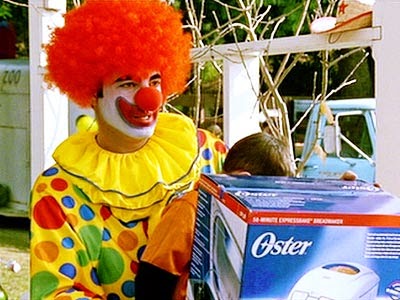 How does Vince Vaughn rate in the grand tapestry of True Detective?


After months of rumors, it was finally confirmed yesterday last week that Vince Vaughn has indeed been cast in HBO’s True Detective second season. Now, we here at Filmgraphs don’t normally talk about television since we’re trying to focus on analytics and such which is a million times more difficult on the TV, but since this is one of those rare occurrences where a television show managed to entrap movie stars in its cankered maw, I’ll make an exception.

The reaction to the casting of Vaughn was mostly mockery, as True Detective had become the best series on television last year (although Breaking Bad did win the Emmy for Best Drama Series against it). True Detective kept everyone enraptured for the duration of its eight episode run, dazzling the audience with crazytheories about The Yellow King, insane six minute one-shots, and Alexandra Daddario’s cleavage. It was so good that even Obama was left spellbound. The adventures of Rust Cohle and whoever Woody Harrelson’s character was were so well-regarded that people are aghast that Fred Claus will be spouting dialogue along the lines of “the hubris it must take to yank a soul out of non-existence, into this meat, and to force a life into this thresher.” They are worried that Vaughn won’t be able to fill the shoes of the biggest winner of True Detective, Matthew McConaughey.

The whole outcry seems ridiculous. It’s not like writer / showrunner Nic Pizzolatto is going to be writing the same or even remotely similar characters as detectives Cohle and Marty Hart. It’s a separate story, and I sincerely doubt that he’d accept Vaughn’s casting if he didn’t think the man capable of playing the part. Also, let’s take into account that Vaughn probably won’t have a comparable responsibility that McConaughey did. While the inaugural season was clearly McConaughey and Harrelson’s show, this second season appears to have four roles being earmarked for big names. Colin Farrell got cast at the same time as Vaughn, and Rachel McAdams has been offered a role that will apparently not be terrible, and Taylor Kitsch, who has a spotty track record himself, is all but assured a last spot. Vaughn isn’t going to be as responsible for the success or failure of this series to the degree that McConaughey was to the first season.

But that’s just my opinion, and Filmgraphs is not about opinions. It’s about the numbers! Sweet, cold, unflinching numbers! So let’s talk some numbers!

Is Vince Vaughn such a terrible idea? His resume isn’t so incomparable to McConaughey’s when you think about it. The term “McConaissance” exists for a reason. It wasn’t so long ago that Matthew McConaughey was typecast as “that guy who takes his shirt off in every movie”, just like Vince Vaughn has been typecast as “Vince Vaughn”. True Detective and Dallas Buyers Club launched McConaughey into superstardom, but what the state of his McKingdom before his casting? Assuming he was cast around April 30, 2013 (which is when the first article I can find talking about his casting is dated), let’s take a ten year look back on his films and how they did critically: 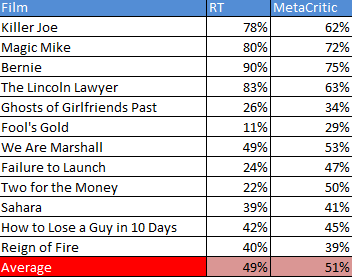 This spans from 2002 to 2012, and as you can see it’s not exactly tremendous. There is a two year between Ghosts of Girlfriends Past (2009) and The Lincoln Lawyer (2011) where McConaughey is mostly missing in action, which he explained in an interview with Deadline:

In saying no to those things, I knew work was going to dry up for awhile. I still said no. No lasted six months. That stretched to a year, and still nothing came in. Year and a half, still nothing. At two years, all of a sudden, in my opinion, I became a new good idea for some good directors. Steven Soderbergh called with Magic Mike. William Friedkin called with Killer Joe. Rick Linklater called me with Bernie but I probably would have done that anyway because he knows what I can do. In those two years that I took off, I didn’t re-brand. I un-branded.

That explains the gap and the sudden uptick in movie quality. The four movies leading up to his casting were far better regarded than his previous fare and McConaughey was generally praised in each role, so his breakout in True Detective wasn’t unthinkable.

So how does Vince Vaughn compare in the same ten year window prior to his casting? 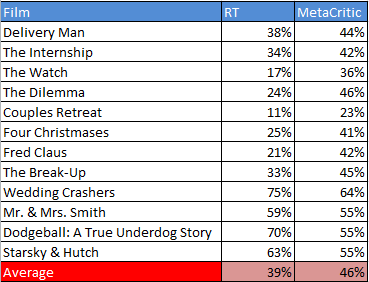 Luckily, they both filmed 12 movies apiece during this time (in major roles) which is convenient for the sake of this comparison. Critically, on average, they appear pretty similar. However, Vaughn doesn’t have the string of critical success that McConaughey had prior to being cast in True Detective and doesn’t have the dramatic movie resume that the latter had been building before his casting. His attempt at a more serious role in The Delivery Man fell flat. The last time he played serious before that was 2007’s Into the Wild. Based on that alone, I’d say people’s skepticism isn’t completely unwarranted.

Another hurdle Vaughn is going to have overcome is that, unlike McConaughey and Harrelson, there are going to be previous performances to live up to. Woody Harrelson was very solid as Marty Hart while McConaughey basically reshaped the world in his ponytailed image. They have set the bar rather high. If Vaughn is anything less, everyone who doubted him will probably and somewhat unfairly continue to deride this casting decision.

That said, let’s all calm down about Vaughn potentially ruining True Detective for everyone. He's never been bad in any role, per se, they're just usually in terrible movies, and barring a complete meltdown in writing quality from Pizzolatto or the new directors not being up to what Cary Joji Fukunaga did last season (Justin Lin, who directed Fast Five and the unimpeachable Community paintball episode, is signed on to direct at least two episodes), I'm sure he'll be just fine and peddling Lincolns in weird commercials in no time.