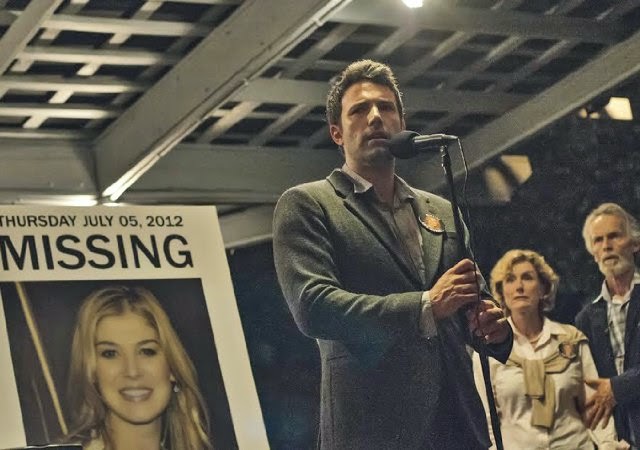 In a year at the box office that can be described with such biblical descriptors like “apocalyptic” and “an unceasing hellscape”, Gone Girl has become Ben Affleck’s highest grossing film, having passed his Academy Award-winning Argo this weekend. Argo infamously won the Oscar for Best Picture despite its director/star Affleck not being nominated for his directorial effort, something that has only happened once in 80 years before it. Luckily for him, such a snub will be impossible this year. Doubtlessly, Gone Girl will garner its share of nominations if only because the field this year seems extremely weak. It is almost certain that the film will get a nomination for Best Picture, since practically everything gets nominated for that particular award now (last year’s nominee count ended up being nine, down from ten). There are two reasons why Affleck won’t get nominated for Best Director: one, the Best Director category is limited to five nominees, and two, he didn’t actually direct Gone Girl.

It’s weird, right? How many of you read that and said “wait, didn’t David Fincher direct Gone Girl?” Probably all of you, since you’re on a very niche film website and thus must know something about the film industry. However, you have probably run into a few people who thought Benjamin Affleck directed and starred in Gillian Floyd’s novel of relationships with sociopaths. Can you blame them? How many average people can connect Fincher to any of the work he has done without the assistance of the internet? Meanwhile, at this point, filmgoers just associate an Affleck-starring vehicle with an Affleck-directed one. People know that Ben Affleck directed those movies because the entire world spent the lineup to The Town or Gone Baby Gone thinking “wait, Ben Affleck directed this movie? And why are we watching it?” Such antipathy existed because everything else Affleck has been in in the past decade has stunk out loud. It might have been dispelled recently since, for the past decade, Ben Affleck the Actor’s career has been saved entirely by Ben Affleck the Director.

Ben Affleck the Actor’s career started as part of two separate film families. He started, somewhat notoriously, as a favourite of Kevin Smith, getting cast in Mallrats as the antagonist and then the lead in Chasing Amy. He then wrote and starred in the acclaimed Good Will Hunting, which paved the way for his entry into his second film family with Michael Bay. A year after being in Smith’s high water mark Chasing Amy, Affleck got cast in what was arguably Bay’s best film Armageddon (at least personally it was my favorite, although The Rock is a close second). It looked like Affleck was on his way to success.

Only suddenly he couldn’t carry a hit. He had very modest success in very modestly received movies like Dogma or Changing Lanes and sprinkled in big budget movies that are basically unwatchable today in Pearl Harbor and The Sum of All Fears. If he had kept on turning a profit like he had during these days, this probably wouldn’t have been a big deal. Obviously he didn’t.

Affleck started to have bombs explode in his face like he was Wiley Coyote. After Daredevil ruined Daredevil, Affleck went into his Bennifer phase where he got engaged to Jennifer Lopez, got sent to rehab, broke up with J-Lo, started playing poker professionally, and starred in a bunch of terrible movies that failed commercially and critically.

Then, in 2007, Ben Affleck the Director was born. Affleck directed Gone Baby Gone which had, quite frankly, all the makings of a disaster. It was his directorial debut, his name already mud after years of being Bennifer, star of bomb after bomb. His brother Casey Affleck, who looks like Ben Affleck stripped of his Hollywood good looks, was cast in his own first lead role. It didn’t look like it would be the most successful venture ever.

While it didn’t make a lot of money, Gone Baby Gone was a success for all involved. It ostensibly turned a profit (although it likely did not for the studio, since it opened sixth and stayed around that rank for its run, turning the assumed profit on longevity), ending Affleck’s string of losses.  More importantly for his career at this point, the film was critically acclaimed. People went from “why is Daredevil directing?” to “hey, maybe Daredevil directing isn’t the worst idea”.

However, this didn’t really do so much for his acting career. When Affleck did show up in front of the camera again in the following years, it was in supporting roles in more mediocre movies. His post Gone Baby Gone filmography can basically be split into two sides: Affleck-directed and non-Affleck directed.

All the movies he’s not actually directing himself in didn’t exactly set the world on fire, while the films he directed himself were huge hits, culminating when Argo won Affleck an Oscar for Best Picture. While The Town and Argo both made nine-digit profits, only two of his non-Affleck directed features found itself in the black profit-wise, both with asterisks (Smoking Aces has Affleck in it for maybe 10 minutes, Runner Runner made all its money internationally and its validity left debatable).

Gone Girl is the first sign that Ben Affleck’s acting career is making some progress independent of him directing. It’s the first big commercial and critical hit he’s had solely an actor in since Chasing Amy It might be the exception though, as he’s about to portray Batman in the upcoming Batman vs Superman: Dawn of Justice film that I’m a more than a little skeptical about (although it’s certainly a lock to make a bucketful of money) and after that has another self-directed film in Live by Night. Gone Girl may be the last we see of Ben Affleck as a directed actor in a good film for a long time.