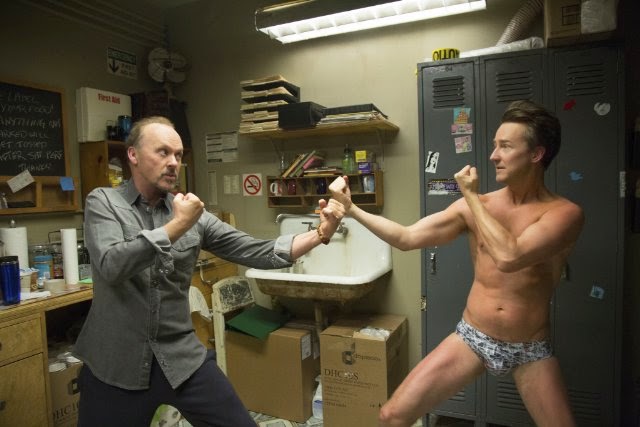 and the Unexpected Virtue of Ignorance


At the end of every year, I go to the Wikipedia page "20YY in Film" and count how many movies I watched. This year, 2014 in film, I counted 56. This doesn't count other movies I watched this year that were released in any other year than 2014. Obviously, 56 isn't a normal number. I would even say calling it an "above average amount" would be too tame. 56 is way too much for a normal person. Oh God, did I watch 56 movies? Is that why I had all those SCENE points?

Anyways, I figured it'd be fun to calculate how many hours of my life I whittled away watching new movies this year, and double it as a recap for the year. Enjoy my misery.

All the excitement of Russian finance crammed into two hours I'll never get back.


Caravan is shit hot. The fact that Whiplash never got a proper release and marketing push will baffle me to the end of time.


Sort of forgotten this awards season was Michael Fassbender, who did the best mask acting in a mediocre movie since Elrond in V for Vendetta.

Boyhood
Rating: A boyhood worth of memories
Running time: 165 minutes
I think we all wish our boyhoods were scored by The Hives.

White Bird in a Blizzard
Rating: Unrated
Running time: 91 minutes
A movie that didn't even appear on the Wiki page I'm referencing, I only remembered it because I had the term "2014 Naked Eva Green Trilogy" rattling around in my head.

The Raid 2
Rating: A hotel of criminals built on a foundation of dead henchmen
Running time: 150 minutes
A guy who died in the first movie comes back in The Raid 2 as an entirely different character and dies again, and I doubt anyone really cared, what with the being too distracted by highly illegal martial arts stunts.


Non-Stop
Rating: One plane landing without a tail
Running time: 106 minutes
It's getting to the point where Liam Neeson is the most bankable star in Hollywood, which is obviously bananas.

That Awkward Moment
Rating: One awkward moment lasting an hour and a half out of five awkward moments
Running time: 94 minutes
Two of the best young actors in the business in Miles Teller and Michael B. Jordan around, and instead we get treated to Zac Efron showing up to a party with a strap-on.

Pompeii
Rating: W.S
Running time: 104 minutes
Pompeii needed four screenwriters to make a story where, suddenly, a volcano erupts at the end and basically makes the last two hours of everything pointless.

300: Rise of an Empire
Rating: 300/1000
Running time: 102 minutes
A more appropriate title, since really no empire rose or began to rise in this film, would have been 300: I Wonder What the Spartans Are Up To.

He's been an insane Nazi commander, the evilest wizard, Hades,a serial killer, and now the charming adventurer / Grimace purple-bedecked concierge of a Wes Anderson movie. At this point, they could cast Ralph Fiennes as Larry Bird and I wouldn't at all be  surprised to hear he crushed it.


Sort of unnecessary. Sort of okay.

Need for Speed
Rating: 40 KM/h
Running time: 130 minutes
About as good as you would expect a game based on a video game series could be, which is in no way a compliment.

Divergent
Rating: Another waste of Miles Teller
Running time: 139 minutes
I remember Theo James! From that show Golden Boy! Whatever happened to it?

Draft Day
Rating: One Cleveland Browns draft
Running time: 110 minutes
"I read the Seattle Seahawks blogs! I know you're getting hammered!" said Kevin Costner at one point of this terrible movie, revealing the big twist that no one involved in this movie has any idea how the NFL works.

Brick Mansions
Rating: Bricked
Running time: 90 minutes
Say what you will about Paul Walker, but no one deserves this to be the last movie he'll have completed. This is Raul Julia all over again.

X-Men: Days of Future Past
Rating: Three more years
Running time: 131 minutes
I commend the series for  improving in light of the fact that they're basically forced to make a new entry every three years. Lieutenant Colonel Nicholson of The Bridge of the River Kwai would be damned proud!

How to Train Your Dragon 2
Rating: Dragonair
Running time: 102 minutes
Hopefully, Jay Baruchel made enough money from this to fund Goon 2.

The Fault in Our Stars
Rating: So many tears
Running time: 126 minutes
It's not a great date movie, unless you have some really weird shit going on.

Edge of Tomorrow
Rating: A thousand Tom Cruise deaths
Running time: 113 minutes
Whoever decided that Edge of Tomorrow was a better name than All You Need is Kill should be tarred and feathered.

Maleficent
Rating: Mag-leficent
Running time: 97 minutes
Every Disney princess movie needs a gritty reboot, apparently. I was jokingly thinking of suggesting a reboot of Snow White and the Seven Dwarves, and then, in horror, I realized it had already happened and, in fact, a sequel is in the works.

Those proposed sequels in the credits sequence are obviously all fake, but are any of them really worse ideas than a gritty reboot of Snow White?

Transformers: Age of Extinction
Rating: A fate worse than Jazz
Running time: 165 minutes
It is entirely possible that this was an elaborate scheme by the US government to siphon funds from the Chinese. Even if that's true, Michael Bay remains unforgiven.

Dawn of the Planet of the Apes
Rating: a computer-generated smiley face mo-capped flawlessly by Andy Serkis
Running time: 131 minutes
I wish Andy Serkis was nominated and won the Oscar for his performance as Caesar, if only to walk up to that stage, say "The Serkis is in town!", and then drop the mic.

Guardians of the Galaxy
Rating: 5000 Candles in the Wind
Running time: 122 minutes
Where the hell was Wal-Rus?

Hercules
Rating: Kevin Sorbo
Running time: 98 minutes
The best Hercules movie this year, which is simply no feat at all.

Lucy
Rating: 100% Brain Power
Running time: 89 minutes
It's about a woman who gets a magic drug that unlocks her entire brain capacity which inevitably turns her into a supercomputer USB drive, and it still wasn't the weirdest ScarJo movie released in 2014.

Get On Up
Rating: Sit on Down
Running time: 139 minutes
I couldn't think of what to say about this movie, a problem that Get On Up suffered from as well.

The Expendeables 3
Rating: One rambling expository dialogue out of seven
Running time: 126 minutes
I had entirely forgot Mel Gibson was even in this movie, which is a bad sign seeing as he's the main antagonist and shot Terry Crews.

Step Up: All In
Rating: No Robot Man
Running time: 112 minutes
For a supposed "All-star crew comprised of the best of Step Up", there was a distinct lack of Awesome Robot Man from that one movie, which makes this sort of a Pro Bowl type situation, where the player you actually want to see declines to show up.

The Giver
Rating: Black and White
Running time: 97 minutes
If nothing else, The Giver gave us the term "stirrings", which is the most amazing term for anything ever.

Let's Be Cops
Rating: New Girl
Running time: 104 minutes
It's basically an episode of New Girl, which is a show I watch anyways.

If I Stay
Rating: Schoolboy chivalry
Running time: 106 minutes
It's sort of a gray area on whether I should be counting If I Stay, since I only watched until the guy in the movie said "you can't hide any more. I've seen you", at which point I swore off movies forever.

Sin City: A Dame to Kill For
Rating: Clothed Eva Green
Running time: 102 minutes
The final entry of the 2014 Naked Eva Green Trilogy did not disappoint in delivering us naked Eva Green, although it disappointed in every other aspect imaginable.

Birdman
Rating: "Michael Keaton screaming "CA-CAW" in the middle of a crowded street"-level of amazing
Running time: 119 minutes
I can't think of a movie that wouldn't be made infinitely better with the sub-heading "And the Unexpected Virtue of Ignorance".

A Walk Among the Tombstones
Rating: A meandering stroll
Running time: 114 minutes
Neeson starred in three movies this year. Three! He was the same guy in all of them! America can't get enough of Qui-Gon Jin!

The Equalizer
Rating: The third backup singer of "Wally and the Pips"
Running time: 132 minutes

That scene in The Wolf of Wall Street where Rob Reiner goes nuts because someone interrupts him while he's watching the television show of The Equalizer is about a thousand times more entertaining than this entire movie was.

The Imitation Game
Rating: Two and a half Cumberbatches out of four
Running time: 114 minutes
My rating might be skewed a bit because of the audience I was watching it with, who were all octogenarians prone to terrible coughing fits and needed every moment of the film explained.

Inherent Vice
Rating: a "You just don't get it" spoken by a man wearing a checkered fedora
Running time: 148 minutes
A movie that had no clear intention of being watchable.

Wild
Rating: I bought $500 worth of hiking gear
Running time: 115 minutes
And I will almost certainly never use any of it.

The Hobbit: The Battle of the Five Armies
Rating: Five armies too many
Running time: 144 minutes
Can't wait for The Silmarillion so I can sit through another eight hours of appendices.

The Interview
Rating: Disastrous
Running time: 112 minutes
A movie so boring that you'll wish it wasn't your patriotic duty to watch it.
Since this is mostly a graph site, here is the data in graph form:

So, I spent 108 hours, 57 minutes, and God knows how many seconds watching movies released in 2014. Who knows how much more time on various other movies, television , YouTube videos, raccoons marching across my lawn, etc, I spent watching life pass me by?! I could have at least learned basic Flemish. I could have learned the Flemenco. Surely, I could have saved several flamingos!