American Sniper and the Magnitude of its Opening Weekend

American Sniper is defying all reason.

I wasn't planning on watching American Sniper. I had read the book by Chris Kyle, the titular character, and while I found the bluntness of his acts and views refreshingly honest, it very much felt a bit too callous towards the loss of life. Eventually, I ended up watching it out of boredom and desperation on a Friday night.

My friend and I both had free passes to a VIP showing of the film. For people who don't go to Cineplex / don't live in Canada / don't go to the movies way too much, a VIP showing is basically a cash grab by the theater chain, sitting you in luxury seats and letting you bring beer to your seat in the  kind of cups your mom used to give you to brush your teeth, and charging you double the normal price for the privilege. We arrived about thirty minutes early. For the first time ever, it was completely sold out.

So we decided to go to a showing with the unwashed peasants at an AVX theater, which again is slightly more expensive since they let you sit in fancy seats that ostensibly move along with the movie if you want it to which nobody ever does. Arriving for a 10:00 VIP showing meant we were ridiculously early for the new showtime at 10:50. We must have at least been a full hour early. The theater was jam packed. We ended up having to sit in the front corner seats.

None of that is particularly too shocking. It was, after all, opening weekend for a movie that had all the recipes of success. It had Oscar buzz, with six nominations. It had Bradley Cooper, who has amazingly transformed from "the bad guy in Wedding Crashers" to America's favorite actor / now-three-time Oscar nominee. It was adapted from a New York Times Best Seller. It was directed by Clint Eastwood, who I guess is a director who has been pretty good in the past. American Sniper had a lot going for it. It had every reason to be sold out that weekend. However, what is shocking is how bananas crazy successful it was.

On it's wide-release weekend, American Sniper pulled in $89 million at the box office. The previous highest January opening weekend was last year's Kevin Hart vehicle Ride Along which brought in $41 million. It has already eclipsed the nine-figure mark as of Tuesday and is showing very little signs of slowing down. Box Office Mojo is predicting a total gross of around $250 million and "maybe quite a bit more". Much has been made that American Sniper has already made more money than the rest of its fellow "Best Picture" nominees combined. I think it's more impressive that it will probably make more money than the rest of January combined.

Okay, maybe just a paragraph ago I listed multiple reasons why the movie should be successful. But, when you consider all the factors that pointed to more modest results, being this successful is nuts.

The fact that Ride Along was the preceding holder of January box office supremacy should be evidence enough that this is a month of woe. January is generally known as the second worst month (ahead of only February, home of Vampire Academy!) in terms of movie quality, as it's usually just a slop trough where movies get dumped to avoid any legitimate competition. The Oscar hopefuls would have already gone through theaters to remain fresh in the voters' minds for the New Year deadline (American Sniper qualified by having a four theater, limited release just before the end of the year), and studios are ramping up for the lucrative May-July summers. As such, box office profits are almost uniformly terrible during the first month of the year and are worse than any other month. Here's what the domestic gross looks like on average over the last ten years by month. 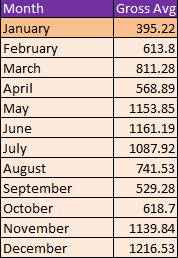 American Sniper is already blowing away that trend. The closest comparable to this off-season demolishing was last year's The Lego Movie, which was released in February and into all our hearts, but the latter wasn't rated R. American Sniper is performing more like a May blockbuster.

This is beyond anything any war movie has accomplished, maybe ever

Consider that American Sniper is ranking right up there in domestic gross with some of the biggest war movies ever, and it's only been out for one goddamn week! It's done more business already than Angelina Jolie's Unbroken, which has all but finished its run in theaters. If you don't count wars fought against blue-skinned cat folk or other space monsters, American Sniper is going to rank in the top of the war movie genre easily.The highest opening by a war movie before American Sniper was Captain America: The First Avenger at $65 million. A more apt comparison in terms of genre, since Captain America has a man with no face as the primary antagonist, would be Pearl Harbor at $59 million. That's a $24 million and a $30 million difference. Saving Private Ryan made $216 million (and accounting for 17 years of inflation, it's probably a boat load more) domestically. Ultimately its worldwide total will probably keep it as the financial champion of war movies, but the fact that you can mention any movie in the same breath as the best war movie ever is more than something.

The Movie isn't even that great

Okay, sure, it is nominated for an Oscar for Best Picture. But then so are a bunch of other mediocre to sort of terrible (Extremely Loud and Incredibly Close) movies. Heck, they even win the category every once in a while (Crash). So let's take that nomination with a grain of salt.

So, why did American Sniper do so well? I honestly don't know. I'm not sure we'll ever really know. I don't think I ever want to know. If anyone ever does find out, they will have solved business.