Why is Bad Boys Coming Back? 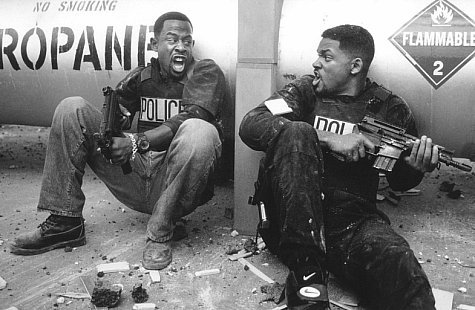 Bad Boys returns for some reason


When I was a kid I attended a Boy Scouts-type group called Beavers. I grew up in a very white, very rich neighbourhood, so all the kids were assholes. The biggest asshole of them all got to watch any movie he wanted and so we all asked him about what happened in these vaunted R-rated movies (this was pre-internet, so spoilers didn’t really exist). I asked him once about Bad Boys, the Will Smith - Martin Lawrence vehicle that had just come out and looked so awesome in commercials. Chief Asshole gave it as scathing an indictment a child can give.

“It was pretty boring.”

Years and years later, I learned that he had spoke true. Bad Boys was indeed pretty damn boring. Bad Boys II came out eight years later and was somehow worse in every way.

And that was the end of that. The director of the two films, Michael Bay, would go on to make a bunch of Transformers films while the two stars, Will Smith and Martin Lawrence, would see their careers begin a decline (the latter’s infinitely more steep).

Let’s be real here, Sony. You can’t be taking chances anymore. 2014 was a nightmare. 2015 has been pretty darn terrible. The Bad Boys franchise is not your Mad Max: Fury Road. It’s not your Jurassic World. The franchises that are getting reboots and succeeding usually have at least one revered entry. Both the Bad Boys films were pretty bad. Watch this video, titled “The classic chase sequence in Mike Bay’s ‘Bad Boys II’” and tell me if at any point you were even a little entertained.

Is this going to stand up in a post-Furious 7 world?

They honestly didn’t even make that much money. Bad Boys was a moderate success. This was back before people just handed Michael Bay mountains of money, so surprisingly Bad Boys had a modest budget of $19 million. It made a respectable $65 million in 1995 dollars. Even so, that was only good for 27th in 1995, beaten by such immortal classics such as Mortal Kombat and Congo.

After Bad Boys, Will Smith went supernova and became WILL SMITH. He made Independence Day in 1996 and Men in Black in 1997 and became a star, but almost immediately his light began to dim. Wild Wild West was a mess and his two serious films, The Legend of Bagger Vance and Ali, bombed. By 2003 he was ready to go back to the well for Bad Boys II. Martin Lawrence’s biggest hit during that time was Big Momma’s House, so the less that whole period is discussed the better.

Bad Boys II was underwhelming in every way. At a cost ten times that of its relatively humble predecessor, Bad Boys II made back its total budget and that’s pretty much where the positives end. Let’s put it this way: a movie with Will Smith blowing everything up made less money than a movie about Will Smith getting Kevin James laid.

Time has done nothing for either lead. Martin Lawrence has had a miserable twelve years, his most successful film during that time being Wild Hogs. Will Smith has seen his status as a blockbuster star fade slowly. I would say that director Michael Bay followed Bad Boys II with four smoldering piles of garbage in the form of a beloved childrens’ toy line, but at least they made a ton of money.

So why, Sony, are you doing this to yourself? There could not be a worse time for this. There could not be a reason for this. Will Smith isn’t a draw anymore. Martin Lawrence is barely a working actor. Michael Bay isn’t even signed on as a director. Joe Carnahan, director of The Grey and Smokin’ Aces, has made small budget films that, if not entirely work, at least turn a profit. That’s what I imagine Sony is planning, a Bad Boys flick with a moderate budget, in which case why even fucking bother. Maybe it'll be a reboot without Will Smith or Martin Lawrence, in which case why even fucking bother. Just call it Rad Roys and cast Miles Teller and Michael B. Jordan as Roy Robinson and Roger Roy and save us the trouble of having to remember Bad Boys.

Stop, Sony. This is a bad idea. You don’t owe Martin Lawrence anything.